SolunoBC, the largest carrier-independent UCaaS supplier in the Nordic market, launches a full-scale integration between its cloud-based PBX service and Microsoft Teams to win over more and larger companies. The combination of Soluno’s powerful PBX functionality and MS Teams as the only interface is something that has long been in demand. The fact that this now exists, in combination with better user-friendliness and the option to choose any carrier, is completely unique in the market.

By developing its own services and integrations in addition to its carrier-independent cloud exchange, SolunoBC has become one of the fastest growing suppliers in the Nordic market. With this integration, the company further strengthens its position in driving the market forward in terms of technology and services, regardless of carrier.

For Soluno, it is natural to develop an integration with MS Teams. The company has previously offered solutions to both Lync and Skype for Business. Now with Microsoft’s simplified setup, the work has progressed to broaden the solution offered to companies using Microsoft products.

The service is initially launched on the Swedish market, and the user can use this regardless of which carrier the customers have access to. Soluno offers a complete cloud exchange solution combined with Microsoft Team’s collaborative services in a fully mobile environment through all carriers.

Previously, Soluno has viewed integration with Microsoft as something that larger companies need. The development has been adapted and when the solution is rolled out in Sweden, all companies that work with Office 365 and Teams can get extended functionality with ACD Groups, voice response, line state, attendant views, common interface etc., together with Soluno’s PBX services. 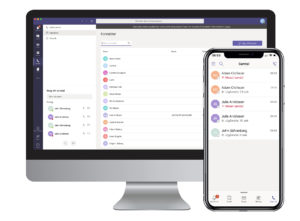 Soluno intends to continue the rollout in more markets during the year, especially in the Netherlands, England, Germany and Finland, where the company already has strong growth and established partners.

“For the end-users, Microsoft Teams often suffice when most people just makes calls and answers by phone. But more complex PBX functionality, stability and operator integrations have been requested. Something that prevented many companies from being able to take the plunge to call using the Teams application. It therefore feels very exciting to now be able to offer this with any carrier. With our setup you get all the functionality from Soluno together with Team’s interface, which together becomes a powerful solution, says Christian Hed, CMO at SolunoBC ”.

SolunoBC is the largest and most expansive operator-independent UCaaS provider on the Nordic market with +150.000 users in the cloud. Soluno is driving the future of business communications by offering a mobile first concept through wholesale partners in Europe.

SolunoBC, the largest operator independent UCaaS provider in the Nordic market, has signed an agreement with the UK operator and service provider Trust Distribution. Th...

The acquisition of Sweden-based companies Telepo and Soluno make them the number 1 leader in European cloud communication solutions for SMEs and service providers and places th...

The acquisition is an essential part of Dstny’s strategy in business integrations; accelerating how business value and innovation is added to Microsoft Teams users. B...