Effective communication is crucial for any business. The ceaselessly expanding digital development eventuates in several useful tools and applications that can meet your team’s needs. Slack and Teams are among the major players in the intra-office communication space with unique structure that help coworkers to communicate efficiently in an organized platform.

Teams was launched as a competitor to Slack in March 2017 and while it also featured chatroom style, it was at first lacking a lot of the integrations and features that made Slack more preferred. However, after a year since release, Teams has become increasingly popular for businesses that have an Office 365 Business plan. In addition, Teams is also free with any Office 365 Business subscription.

Teams recently rolled out an update that pushed its popularity; integration with a host of different apps and a smart search bar. This new update has completely shifted the discussion as of what platform has the most potential business value. 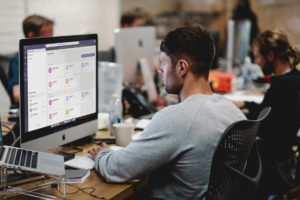 The previous lack of third-party integrations that proved to be a competitive problem, has now been resolved with a wide selection of integration with apps and services including Trello and SurveyMonkey. This has further made the software more of an intuitive communication option for any business. Users no longer have to take screenshots and upload to teams to share, and instead you can quickly attach content similarly to how you would add an emoji to a discussion. Teams also includes an improved search which allows you to insert results in chat as well as use slash commands.

Another great new feature is the ability to create conversation threads to avoid getting lost in the whirlwind of discussions about all different kinds of topics. Instead you can easily catch up by being able to respond to a message or topic in a thread under the original thought. Skype calling is also built into the platform where you can record, transcribe and save Skype meetings to the cloud. Plus, it’s integrated with the company’s voice assistant Cortana.

Slack is arguably the most popular collaboration tool out in the market right now. Many digital agencies, startups and other businesses are already using Slack. Founded in 2009, Slack emerged as a disruptor in the office communication market that was previously dominated by Skype. Slack’s past advantage over Teams lied in its easy third-party integrations and user-friendly design. It was one of the first of its kind to set the standard for office communication platforms that included both desktop and mobile version to stay connected wherever you may be. The long list of apps you can integrate still gives Slack a competitive edge, including its standard integration with Google Drive.

What do they have in common?

Maybe you we’re hoping for a clear answer here, but truth is it varies form company to company. For example, if you’re currently using Google Drive, Slack might be the best bet. But if your office already has an enterprise license, Teams is a better bet. Slack has a great freemium version, but if you already have the Office bundle, Teams also comes for free. Both are also winners in terms of practicality and offer many similar great features.

So all in all, both are great options for communication in the office.  If you’re a startup or small business that is simply looking for a communication tool, Slack should solve your needs. However, if you’re looking for something more secure with more features (even in its freemium version), that also acts as a collaboraiton hub, Teams is your answer.

Soluno’s integration with Teams
If you have Solunos company telephony you can integrate our services directly to Teams. In that way you can get all from your answer groups to other advanced functions such as telephonist functions and button selection menus etc. This essentially means that you and your colleagues can have a great telephony service coupled with Teams that is completely cloud-based. The integration allows your company to use Teams to call while simultaneously being able to continue chats, share documents, etc .

Our Teams solution includes full mobile integration, just as our other services, where you can choose freely between Sweden’s different mobile carriers. We are completely carrier independent and no matter what carrier, you and always integrate with Microsoft Teams and other PBX functions. Our integration also provides full flexibility by being able to choose which users should have Teams telephony. If some users don’t us teams,

By integrating Soluno with Slack, you do not have to switch between different programs. Make calls and send texts from Slack while your presence in the exchange appears directly in the interface. Our integration is called Slack Telephony and with it you can call directly from the tool. It all works via a so-called callback function. The call is initiated in Slack and then forwarded through Soluno’s exchange, which in turn calls you and your recipient. You can call people you have in your chat, contacts from your office phone system and external telephone numbers. The call can be started via simple commands or by clicking the Shortcuts button. The integraiton also allows Slack to know which line state and presence you have. For example, if you are in a conversation, a phone icon will appear next to your name in Slack. If you are, for example, referred to a meeting, are at lunch or on vacation, then icons for this will also appear in Slack.

With remotely working from home becoming all the more popular, this may sometimes include some extra time with our fuzzy friends. Not to mention, dogs are becoming increasingly mor...

Many companies probably sat down in 2019 and talked about that they should be better at digitalization but that it is something that will happen gradually over a few years. All of ...

5 benefits of using a Softphone

You may have heard of Softphones before? Or maybe you use one in your computer right now? For those of you who have not heard the term, a Softphone, simply put, is a software th...